TMIE: On the threshold of the outside world 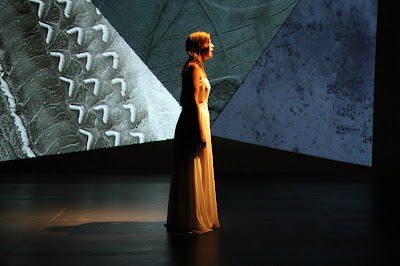 No, it is not a typo. TMIE stands for Transmembrane Inner Ear. It is a gene, active in the formation of the cochlea and then present in its tissues. It is part of the complex mechanism of electro-mechanical transduction of the sound into the auditory nerve.
Problems in TMIE may lead into deafness. The role of this protein, under normal circumstances, is to mediate the passage of the outside acoustic environment — what we call sound, i.e., the variations of air pressure that reach our ear – into the auditory nerve and then into the auditory cortex of the brain, where this information will be processed.
TMIE is the title of this work, a symbol of our connection between our outside world and our inner selfs.
In this opera two goddesses, from two different mythologies, have an improbable meeting and talk about their personal worlds. Meretseger, she who loves silence, unravels what is behind this silence. Selene, who drives her silver chariot through the skies, vibrates to the beats of the stars. Corypheaus listens to the impossible dialog and tries to interpret it.
These three characters represent real people.
Meretseger is Beverly Biderman,  the Canadian woman, deaf since she was 12 years old, received her cochlear implants at 46 and recovered her hearing. She wrote about her "journey into hearing" in the book "Wired for Sound". Selene is Henrietta Leavitt, the American astronomer. She discovered what George Johnson, the author of her biography, rightfully described as an extraordinary feat: how to measure the Universe. Henrietta was deaf but through photometry she was able to "listen" to the rhythms and sounds of the stars. Corypheaus is the Greek Pre-Socratic philosopher Empedocles. He searched for the essencial categories of the Universe and was the creator of the first theory of the ear and hearing. The ear: a bell, a fleshy twig.
We relate to our surrounding inner and outer environment. After we decode what these environments signal to us, what are we left with? Consciousness? Free will? Soul?
Francis Crick suggests that a part of our brain is occupied planning future action. We are conscious of the decisions that we make, not the planning itself.
Did Henrietta Leavitt really listen to the stars? "We hear with our brain" says Biderman. Her conchlear implants produced a "trick of the mind" through which she was able to hear again. "I don't hear like you" she further noticed. Who can in fact tell what Beverly Biderman can hear? How can she know what each one of us really hears?

Promote Your Page Too